Several quick Christmas projects, including one on my new coverstitch.

G liked the henley I made for him for Independence Day , and shortly after that he started asking for a henley. It took me a while, but I finally got around to it.  Jalie Nico is a raglan-sleeved t-shirt for men and boys. It’s SUPER easy and fast. A great choice when you’re starting to sew a Christmas gift at 2 pm on December 24.

Jalie Patterns come in a packet that includes sizing for petit/petite and grand/grande (so mens and boys are packaged together, as are women and girls). For G, I sewed pattern size AA which was based on his chest measurement (42″). The pattern pieces need to be traced which wasn’t exactly onerous for this particular pattern because there are only 4 pieces. The pattern instructions are let’s say “succinct”, but there’s enough there that a beginning sewist won’t be lost. A bonus is information on how to sew knits without a serger.

Both the stripey and solid fabrics were purchased at Fabric Mart Fabrics. G picked out the striped jersey himself from a Julie’s Swatch Club mailer earlier this year. The benefit of buying from a swatch is knowing exactly the colours, weight and stretch of a fabric. Unfortunately I didn’t have a swatch for the solid black so purchased a jersey that wasn’t ideal …  it’s very lightweight and not completely opaque.

Sewing this style of top is so simple. Okay, I’ll just say it – sewing casual tops for men is so easy. There isn’t any fitting or fussing, it’s straight sewing, and in this case that meant basting first, then serging all seams. And when you buy fabric with the right amount of stretch (which I did, hooray!), the neckband also goes on without any swearing.

This is the first ‘final’ garment I’ve sewn using my new cover stitch machine. I made up a test garment that I’ll blog about soon, and in that blog I’ll talk about the machine and what I’ve learned.

For this garment I used the cover stitch (2 needle) around the neckband, resulting in a neat and consistent row of double-stitching. Then I used the same stitch on the hem, and finally the hems on the sleeves. The sleeves were difficult just because the black fabric was so lightweight.  On my test garment there was tunneling and it was difficult to keep the stitching straight so for this top I used RNK Stitch Perfection Tape (double-sided tape) on the sleeve hems. This tape added stability to the fabric so it went through the two-needle cover stitch easily, and it’s water soluble so although it is firm when sewn, it washes away completely.

I started sewing at the beginning the of the 2nd quarter of the football game, and was finished before the final (and maddening/sad) score. So that’s about 2 1/2 hours in total, start to finish, for a top. That left plenty of time to wrap, and have a martini before Christmas Eve dinner. Awesome! And G is happy with it. It fits! 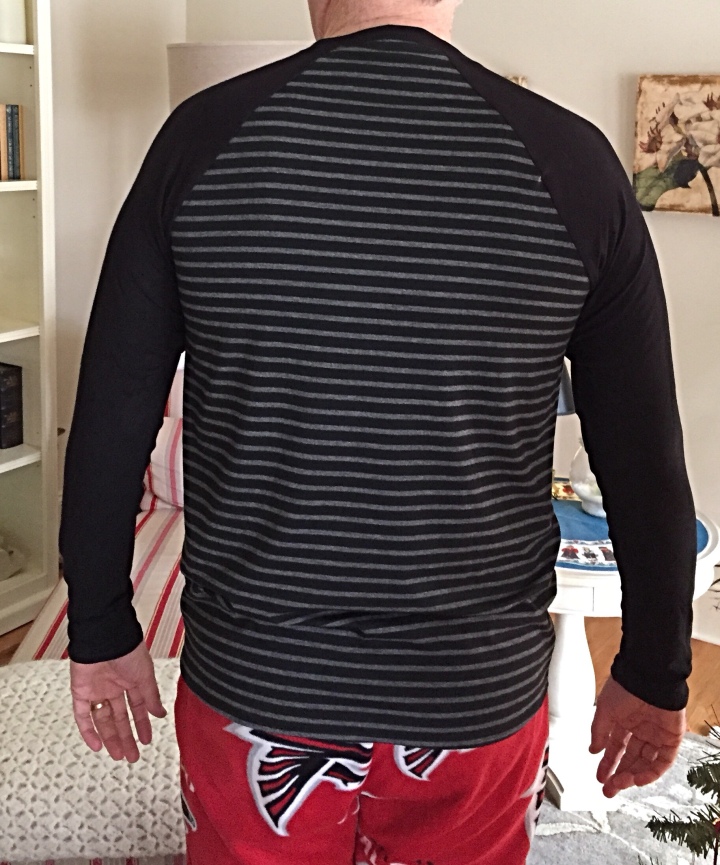 I’ve made up a few other little projects for Christmas. 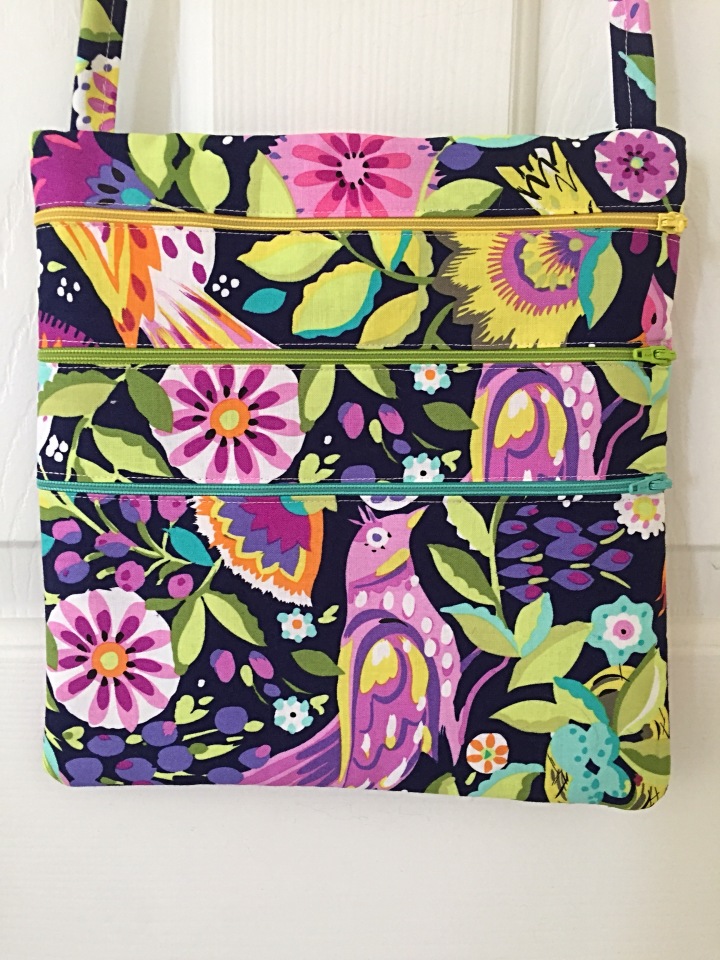 For my mom, I sewed a five-pocket purse using a pattern I’ve had around for a while: The Zip-It-Up Purse by JoAnn Burtscher (can’t find any mention of it online, but it was purchased at a local sewing store). The project uses a yard of fabric, a bit of batting, and 5 zippers (yes, 5) for the two pockets on the front, and 3 on the back. Unfortunately the pattern doesn’t specify that you need to use a pattern with a vertical print. The fabric I picked had a pretty bird print that didn’t align to the layout of the pattern. It still worked out okay, but this is something I need to keep in mind for the next project.

On Mom’s purse checklist she specifically requests pockets for: keys, chequebook, wallet, eyeglasses, a Kleenex, and her lipstick. All covered here! This is not a huge purse, but it’s large enough for her to take to the dining hall at her seniors’ residence or when going out for a meal with family. I love the fabric – I think it will brighten up dark winter days in Canada.

In November I bought a bunch of Christmas fabric with the intention of making table runners for several people, but I just got distracted so I only made 2 and liked both  enough to keep them for us. One is just a double-layer of fabric, the other is lined with reflective batting so it can be used for warm serving dishes. This pattern is all over the internet as the “10-minute table runner.”  10-minutes is an absolute joke. Try 60-minutes plus – which isn’t that long but you certainly can’t whip this up between putting on your mascara at 4:45 and company coming through the door at 5.

When I bought the plaid fabric at JoAnn, the clerk at the cutting table mentioned that it would fray easily, making it perfect for napkins. So I cut 15″ x 15″ squares, then stitched a line about 1/3″ from the edge using metallic thread, and then frayed the edges to the stitching. My previous (limited) experience with metallic thread was just frustrating, but this time I used a spool pin adapter and the thread did not break. (The spool pin adapter sat in my drawer for almost 2 years until someone showed me how to use it. It’s available online from the manufacturer or other sellers: The Thread Director: Specialty Thread Spool Pin Adapter.)

Final Christmas project: The kitties got some jingle bell collars. So far they’ve stayed on and no one is complaining, however we sure know when they’re coming!

So Christmas 2016 was a time for sewing success. That’s all I can hope for!

Hope each of you has had a day full of peace and love.

Sewing & Refashioning with some history of fashion brands and iconic people

Age is a State of Mind
thedementedfairy

Random babbling about sewing, life and whatever comes to mind.

Apps for any screen

A blog for classic style and sewing