Sometimes it’s supremely satisfying to sit down at the sewing machine for an hour or two and walk away with a finished project. This is a fun little project – it ain’t couture!

Until very recently I had (and used) a crochet tab-top hand towel that someone made for me many moons ago. My towel had had a red top on a floral towel, and you can still purchase similar handmade towels on Etsy. The ones pictured below are pretty and bright.

The tab-top towel is ingenious. Hang it near the kitchen sink and it is clearly the dedicated hand towel. Even the most  distracted will gravitate towards this towel if it’s by the sink.

When my own crocheted towel started to look ragged, I tried different ways of making my own (minus the crochet part). Various methods and materials worked, but this particular one is fastest and easiest. The supplies (kitchen towels and napkins) are always on clearance at every end-of-season sale which means this is an inexpensive project.

While it’s possible to use one towel to make 2 hand towels, that wastes half of the fabric napkin. Alternatives to using a fabric napkin are woven tea towels, tablecloths from rummage sales or charity shops, or quilting cotton. My supplies were from an end-of-season sale last summer, and cost under $5, plus maybe $1 for the buttons.

Step 1:  Cut the tea towels in half lengthwise.

Step 2:  Cut the napkin into quarters. This gingham napkin makes cutting and calculating easy. (showing 1/2 of a napkin in the photo below) 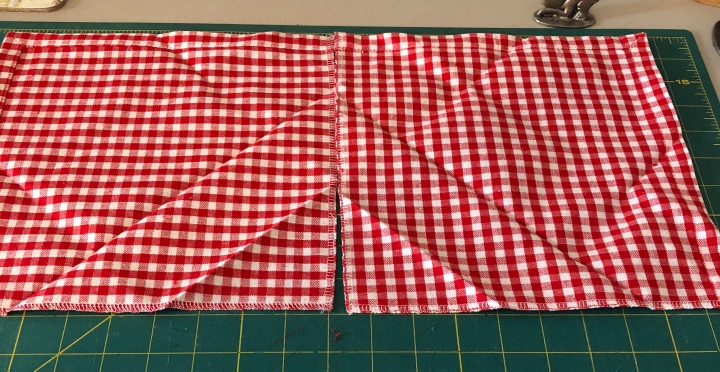 Step 3:  Serge the cut edges of the napkin. The cut napkin winds up with two nicely finished edges so if you use something else finish the edges of the fabric as they will show.  (If you don’t have a serger, edgestitch or stitch and pink.)

You can also serge or edgestitch the cut edge of the kitchen towel but it winds up encased in the tab-top so that isn’t necessary.

Step 4: Fold the kitchen towel into equal thirds so the edges are at the back of the towel.

Step 5:  Fold the napkin as pictured below. The lower edge is where the towel will be attached to the tab-top (napkin).

Step 6:  Keep folding to create an envelope top that will encase the towel. Press the napkin well so there are crisp folds. Ensure that the raw edges of the towel and the napkin are hidden within the pocket. 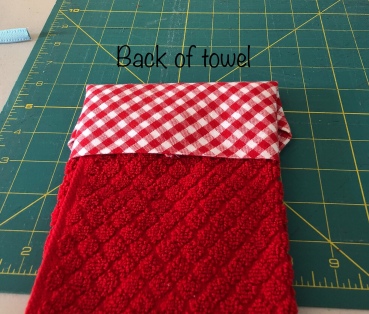 Step 7: Keeping the ‘tab’ portion of the napkin free, stitch the lower edge of the napkin to the towel, being certain to catch both the front and back of the napkin in the seam. Remember that hand towels are washed frequently so be sure to secure the ends of your stitches well. 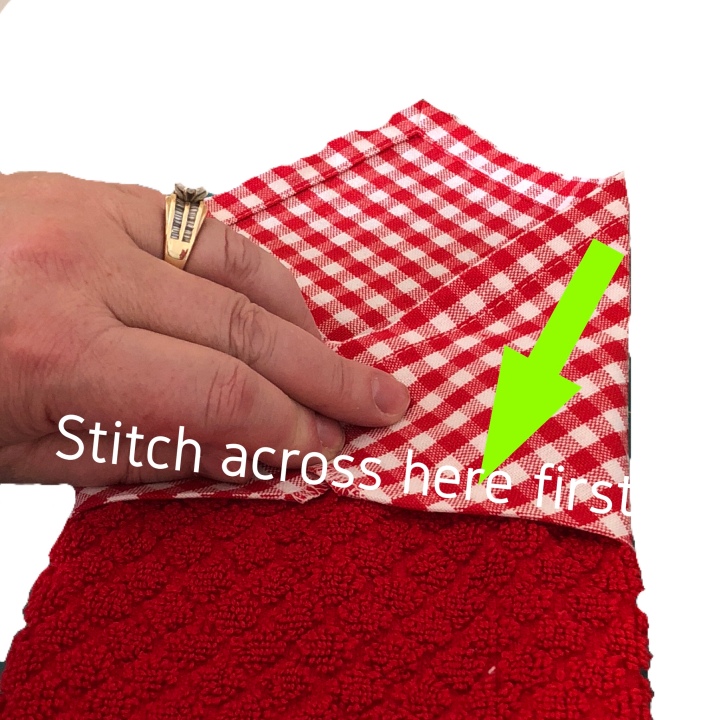 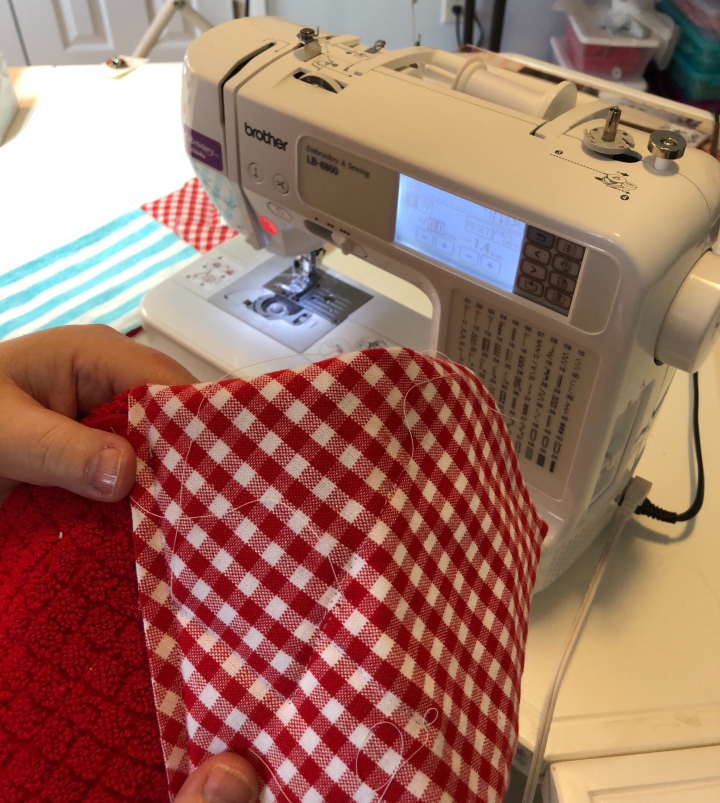 Step 8: Stitch along the folded edges of the napkin inside the pocket. This stitching will show at the back, but it’s a towel. Who cares! (Stitch lines are shown in yellow below.) 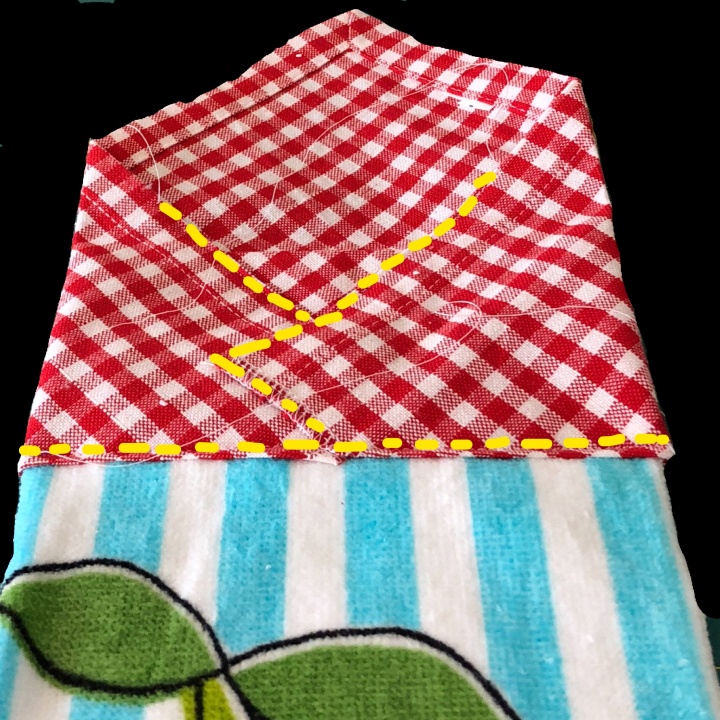 Step 9: Create a buttonhole in the front flap. For added security, use Fray Block at the edges of the buttonhole and seams.

Step 10: Attach the button. I stitched the button by hand and used Coats Secura Button Thread. This polyester thread fuses to itself when heated with an iron. 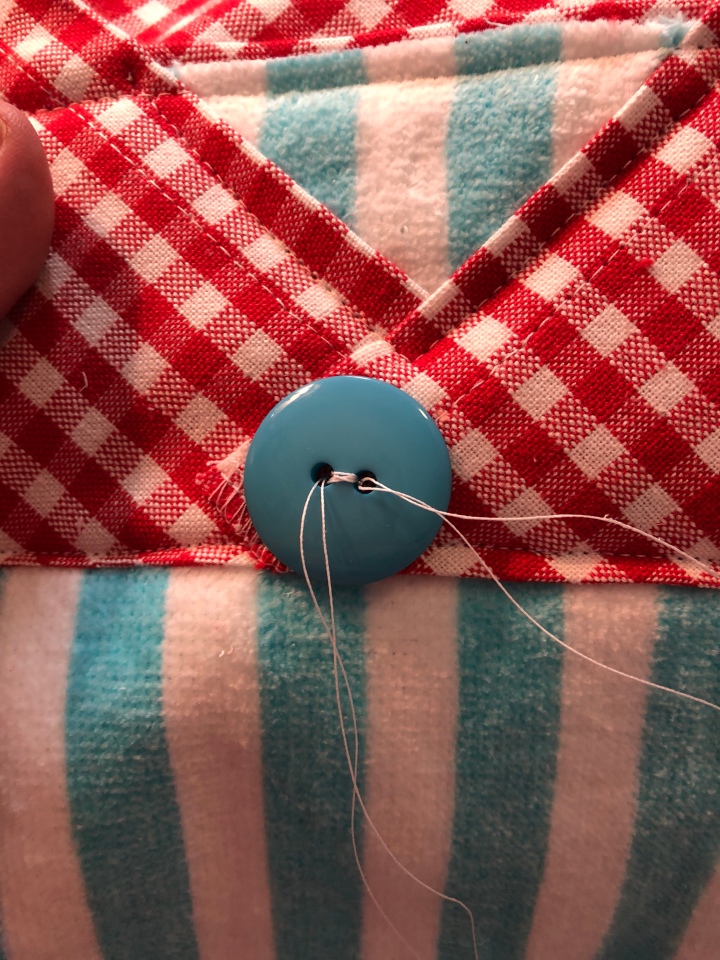 And you are done!

I made up these four towels in 90 minutes. That’s a pretty satisfying evening of sewing. 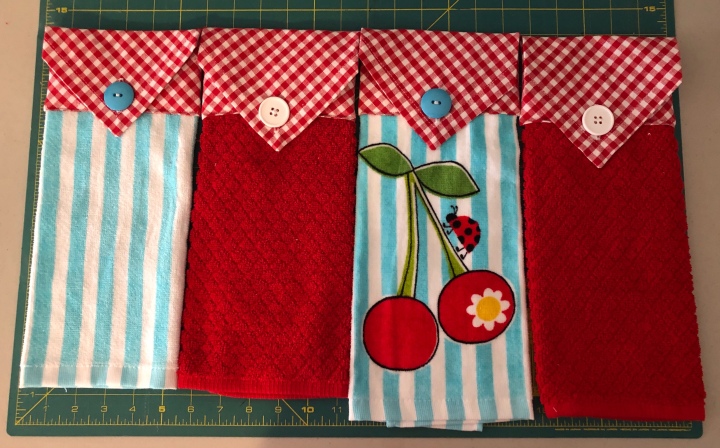