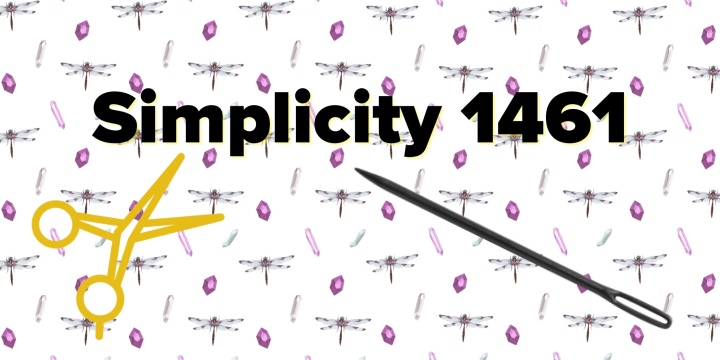 Lately, when I’ve looked through my wardrobe I’ve been bored with everything I own. There are a couple of things I like, but most of my clothes are either very simple and basic, or they don’t fit. The ‘don’t fit’ piece can eventually be remedied, but it’s faster to make something new. So for the next couple of months, I’m focusing on work wear or more polished weekend wear.

Tunics have become a staple of the workplace wardrobe however they’re completely wearable on weekends, too. I work on a large campus and see tunics of all shapes, sizes and lengths (including top-length tunics over opaque tights).

The first garment I made when I came back to sewing 3 years ago was a tunic, and it’s still active in my wardrobe (I’m wearing it today!). But it has no shape other than just bust darts. 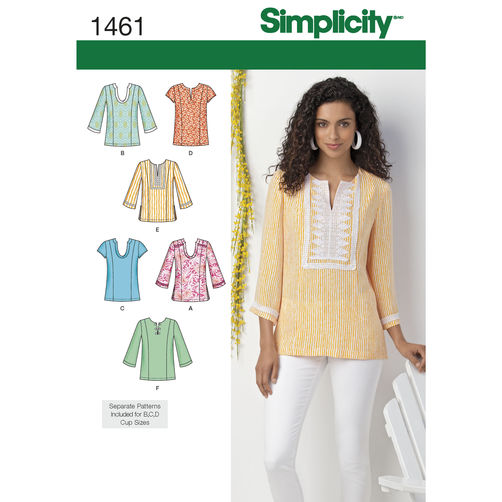 Simplicity 1461 was appealing because it features princess seams. I also liked the gentle shaping and neck opening options. Looking back, I don’t know why I bought the pattern – the envelope styling isn’t great but the line drawings showed some promise.

A couple of months ago I picked up a couple of meters of a pretty poly cotton (65% polyester, 35% cotton) chambray in pink and white. I love pink, and these tones seemed good with my colouring. It’s lightweight, and the polyester means it doesn’t wrinkle much which is a huge bonus in the steam room called Atlanta in the summer. This pattern calls for lightweight fabrics.

This pattern has cup sizing which I so appreciate in a pattern because if I’m being honest, I hate tracing patterns to do an FBA. My only initial alteration was to make the side seam allowances 1″ instead of 5/8″ in case I needed a little wiggle room.

I had some difficulty getting the princess seams to lie flat at the bust, but only because I serged the seams after stitching. This fabric frays so I had to do something, but the density of the serged seam showed through where the princess shaping was most predominant (right on the bust, thanks very much). Yup – another lesson. Don’t serge princess seams over curves! In the end, I wound up using old faithful – stitching and pinking.

Before attaching the sleeves I tried on the top and realized I needed to take off 3/4″ of length on each shoulder to make the sleeve seam hit the ball of my shoulder. Since there was some gathering on the sleeve cap, I was able to cut back the armscye without impacting the fit of the sleeve. 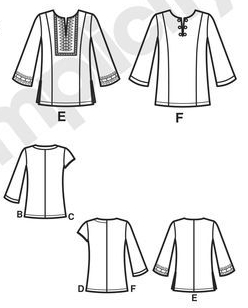 Version F on the immediate left line drawing appears to have 3 grommets on each side of the front opening. Turns out these are buttons. Before sewing on the buttons I thought long and hard about what it would look like, and I thought it would be cheesy with 3 buttons. Then it hit me that buttons would add weight … 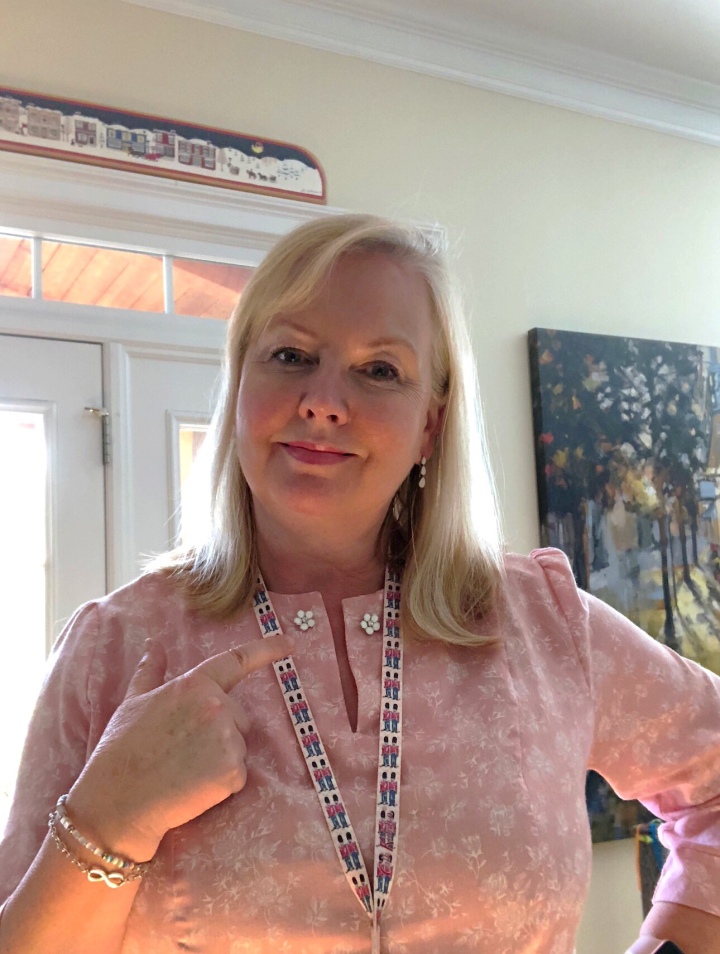 Lesson: If the top is made of a lightweight fabric, the front opening just flops under the weight of the buttons. The buttons I selected are enamelled and a bit heavier, so I decided to add only one at the top of each side. Yes, the front does still flop open. Boo. When I wear this to work I position my lanyard behind the buttons so they sort of have a strategic use … or at least that’s what I’m telling myself. Next time I would probably use a lighter weight button, or maybe skip them all together and use a trim.

This is exactly the kind of top I like to have when I want to look a bit more presentable.   The princess seams bring it up a notch, and the buttons add interest to what is essentially a basic top. 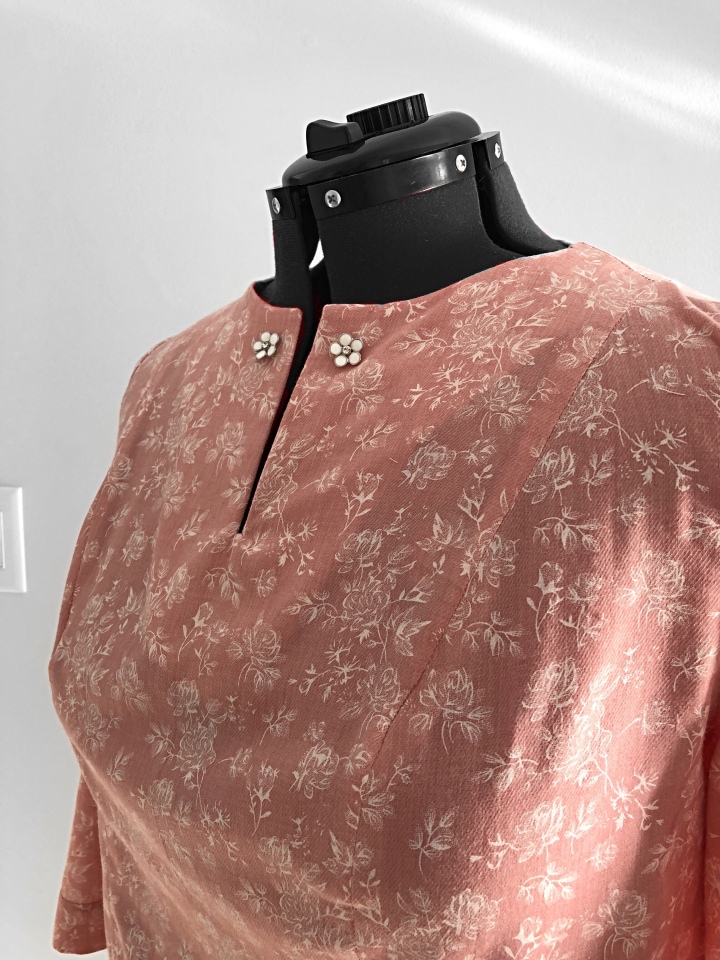 A lesson about this particular fabric: it catches on undergarments. It is just a little bit nubbly – not really rough but there is some texture on both right and wrong sides, and it gets caught on the fabric on some of my bras which necessitates either changing undergarments when I’m already late for work or throwing on something slippery underneath.

I do not like the gathering on the sleeve heads (which is less than drafted because I cut back the shoulders). I’m going to have to learn to draft sleeves because, like Princess Diana, I had a whole closet full of poufy shoulders in the early 1980s and don’t want them again.

This isn’t a particularly exciting make, but it’s nicely shaped and was fast to put together. And I’ve worn it to work 3 times in 4 weeks so it is serving its purpose.

There is some fabric in my stash that would be nice for another version, so I’m planning to make the version that corresponds to the alternate photo from the Simplicity site. I may even invest in pom pom trim! 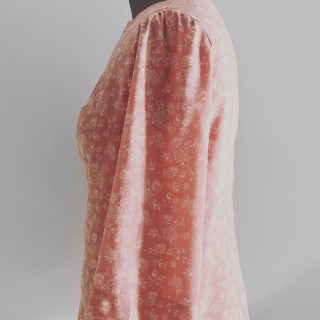 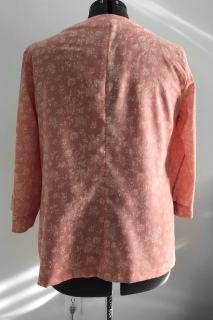 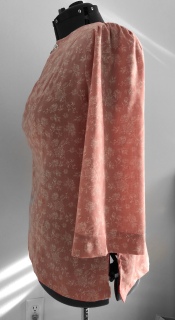 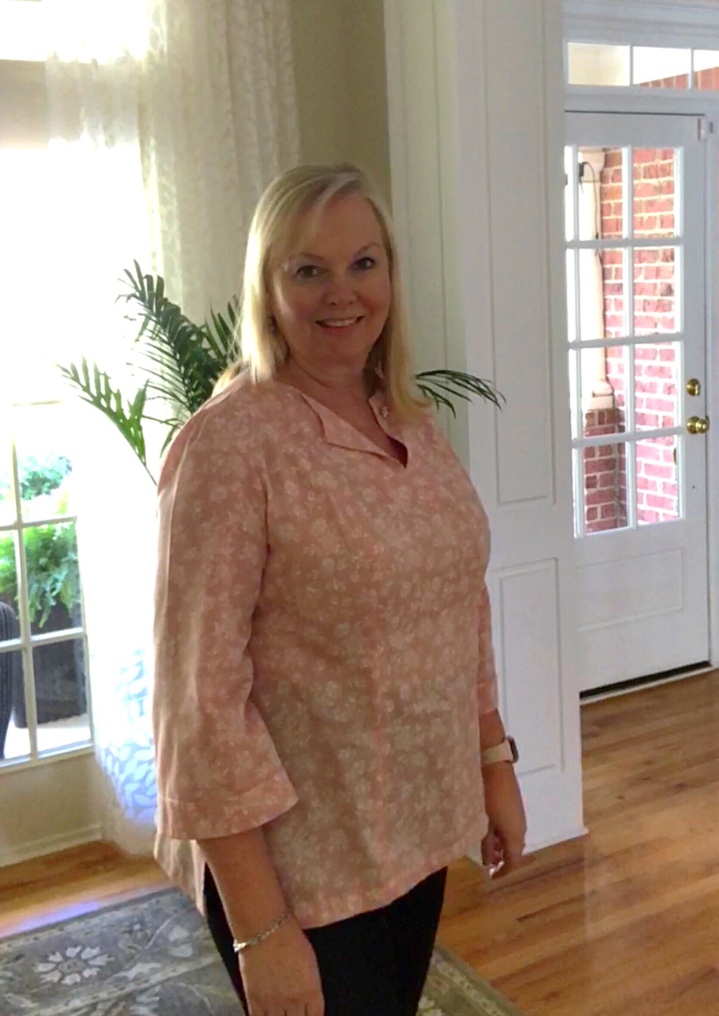 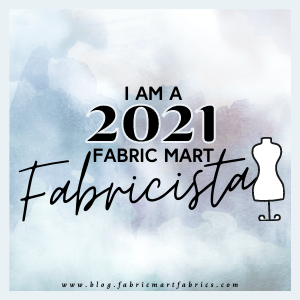