It’s tough to find patterns for menswear! When I saw this one I scooped it up because it actually has things that G will wear. McCalls 6973 makes up a tank top, henley and shorts.

The fabric I used was purchased at JoAnn, and it’s labelled 69% Polyester, 31% Rayon. Initially it was appealing for yet another Plantain t-shirt for me so I had something to wear for Canada’s sesquicentennial, but since the fabric was on sale I figured I’d make something for G. The fabric is a bit fussy – it needs to be washed in cold and line dried. Bonus – it doesn’t wrinkle!

Adjustments – what adjustments? Ah, sewing for men is so easy, especially for this man because he’s pretty trim. I cut and sewed a medium, based on his chest size.

The primary challenge with this project was lining up the stripes when cutting, and figuring out how to best place the neck and front bands on the fabric before cutting. Had there been more crosswise stretch, I probably would have cut the front bands from solid red, but that wouldn’t work with this fabric.

The neck band and front bands are interfaced. Both were basted by hand, and then later slipstitched rather than top stitching.

The collar and front band were a bit problematic there were so many layers, and knits don’t exactly hold a press when you’re trying to turn under 1/4″!

Collars like this always give me difficulty – I can never figure out exactly how much fabric to cut from the rounded ends of the stand collar. If I leave too much seam allowance to tuck in, the collar is too bulky. If I cut the seam allowance too small then it won’t tuck in right and there will be little pieces sticking out. Does anyone have any tips or guidance for this type of collar?

The button hole in the collar was a real problem because this time the collar was too bulky. I wound up making a decorative button hole only because I just couldn’t make a buttonhole properly and there was no way I’d pick out stitches from this fabric. Frankly, the final result looks fine and he’ll never button it up so it doesn’t matter.

To differentiate between my Canada Day top and his Fourth of July top I bought American Flag buttons, but the holes in the buttons aren’t straight so the little buttons aren’t aligned like a flag should be. That was a disappointment, and it was the first thing he noticed about this shirt (“what’s wrong with the flags?”) so guess I’ll have to find different buttons.

The shape of this shirt is great and I think it looks really good – whether he wears it is another story all together.  What.Ever, I’ll make it again. Think he’d go for a fabric with a cat print? LOL 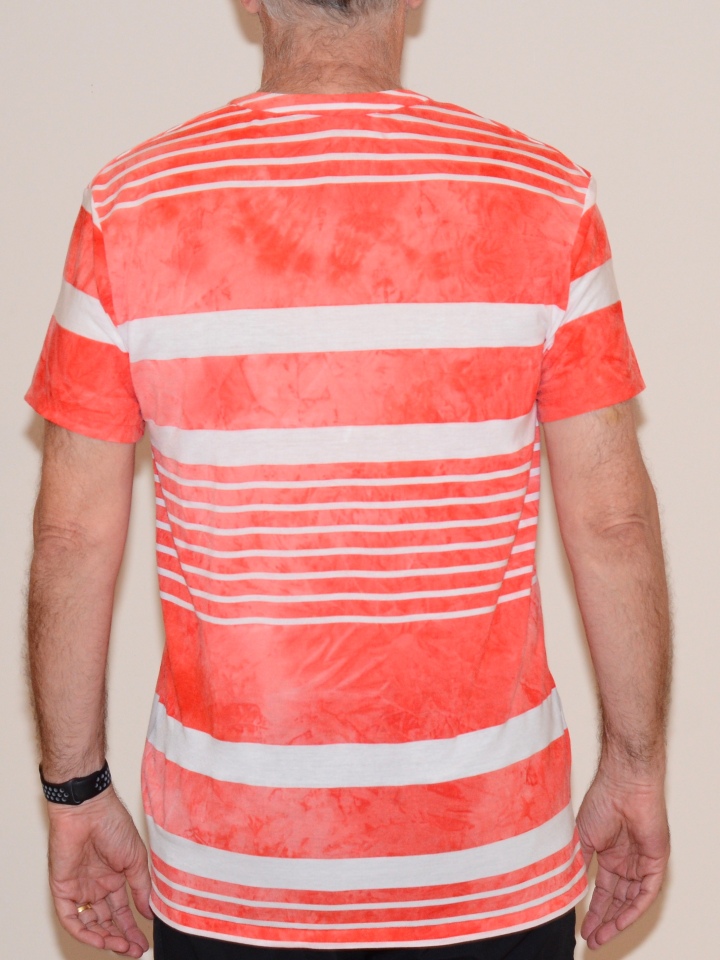